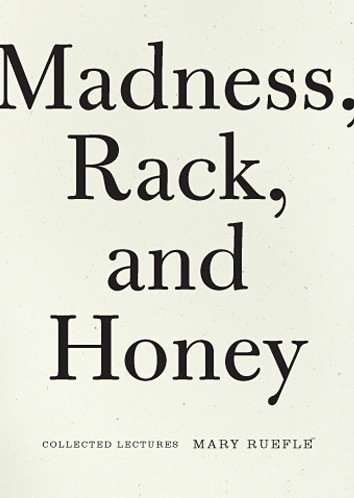 I became aware of Mary Ruefle’s collection of “lectures” with an unusual title after reading the reflections by Mandy Brown and Frank Chimero on their personal blogs. When two or more sources I trust recommend the same thing, I usually start paying attention.

I keep “lectures” in quotations, as the author herself points out that each was carefully written before delivered orally, despite the fact she was told her graduate students would prefer informal, spontaneous talks. Ruefle maintains that writing is her “natural act”, and as individual essays, these lectures work wonderfully.

Ruefle’s prose is marked by an economic use of words fitting for a poet, and she prioritizes her allegiances to poetry and art over knowledge and intelligence. Two mini-collections within the volume are titled “Twenty-Two Short Lectures” and “Lectures I Will Never Give”, and contain several vignettes that could be delivered in under two minutes.

Other chapters are fragmented with citations (Beckett, Kafka, Keats, Rilke, Roethke, Yeats, among many others) and memories, dictionary definitions, occasional advice, and haunting descriptions of art. An art installation by Anna Schuleit Haber in Northampton, Mass supercedes Rufle’s desire to deliver a lecture "on asylum", but her description of the event is nonetheless startling and sublime. No fragment is incomplete on its own merits, but connections are made between various art forms in surprising and delightful ways.

She describes a memory, at age eighteen reading out loud the work of John Keats in a large field surrounded by cows "with bells around their necks", and tears streaming down her own face. A minute later, my own synapses started firing off, and I couldn’t help thinking of the old myth about Charlie Parker, popularized in Ken Burns’ Jazz documentary series, asking the tour bus to stop, and playing his saxophone to a herd of grazing cattle.

Reufle writes as someone who feeds off of the written word, especially poetry, in the same way all of us need food, water, and sleep to survive. Poetry, like all other art forms, she explains in the titular essay, is a physical experience. Three pages in the Oxford English Dictionary are devoted to the word rack, she explains, describing the instrument of torture, the process of undergoing strain or dislocation, the act of tearing apart by force.

It is what poetry does to the world, what poets do with words, and what words will do to a poet. And that’s the rack of it. And if you have never experienced the rack of working on a poem, then you have never worked on a poem. Have you never put language in an extenuationg circumstance with dangerous limits until an acute physical sensation results?

To read this book is to inhabit her mind, and your enjoyment of the book will depend on your experience of briefly living inside this brain at work.

A lecture on irreverence and sincerity(p. 220) pauses abruptly for the following:

There really is a beach in Western Australia where kangaroos swim in the sea and sunbathe afterward, those short white forelegs stretched in the sand

Nothing would make me happier than to see an international ban on fact-checking.

I don’t know how to describe this book better than the two words “strange” and “beautiful”. It’s funny too, occasionally hilarious. But buried just beneath the surface layer of the silliness lives a ton of wisdom. Highly recommended.